‘Amorphophallus titanum’ is in bloom

In the Hortus botanicus Leiden, the Amorphophallus titanum, or the Giant penis plant, is flowering. Thursday afternoon around 14:00 hrs, the spatha began to unfold and in the evening the plant was in full bloom. The plant can still be seen in full bloom on Friday and Saturday, after which it quickly withers away. On Friday, the Hortus opens an hour earlier for the public: from 9:00 in the morning until 17:00 in the evening, visitors can come and see the flower. Afterwards, the private Delegate Party of the ESOF will take place in the Hortus. On Saturday the garden will be open from 9:00 to 21:00.

This titan arum, also known as the giant penis plant, last bloomed in 2009. This is a different, even larger species than the one that bloomed in October 2021. Then it was an Amorphophallus decus-silvae.

In the meantime, the plant has also been pollinated with pollen from a specimen that flowered in June in Botanical Garden Meise, Belgium. Don’t want to miss out on anything? Follow us on Instagram.

The plant blooms for two days: the first day with female flowers and a foul smell, the second day odourless and with male flowers. On Friday, the Hortus opens an hour earlier for the public: visitors can come and see the flower starting 9 AM. On Saturday, the garden is open from 9 AM to 9 PM.

Inflorescence
Amorphophallus titanum or the Sumatran giant arum is known and infamous for its immense inflorescence, which can reach three metres in height and gives off a pungent scent. First, a fleshy inflorescence (the spadix) enveloped in a sheath-shaped bract (the spatha) emerges, which opens after a few days. Both male and female flowers grow in the inflorescence, and are located at the bottom of the spadix. To prevent self-pollination, the female flowers open first. The male flowers follow two days later.

After flowering, a large single compound leaf emerges from the large underground tuber, which can reach a height of four metres. After a growth period of almost one and a half years, the leaf dies, leaving only a tuber under the ground. and the plant rests for a few months. In the following years, the plant produces a new leaf. The leaf is always about twice as big as the previous leaf. With the leafy green and the sunlight, the plant produces food that is stored in the tuber. After about ten to fifteen years of this cycle, enough energy has been built up to start flowering again.

The name of the Amorphophallus titanium comes from the phallic shaped spadix. Literally translated, it means ‘giant shapeless penis’.

An overview of the flowering and growth stages of Amorphophallus titanum 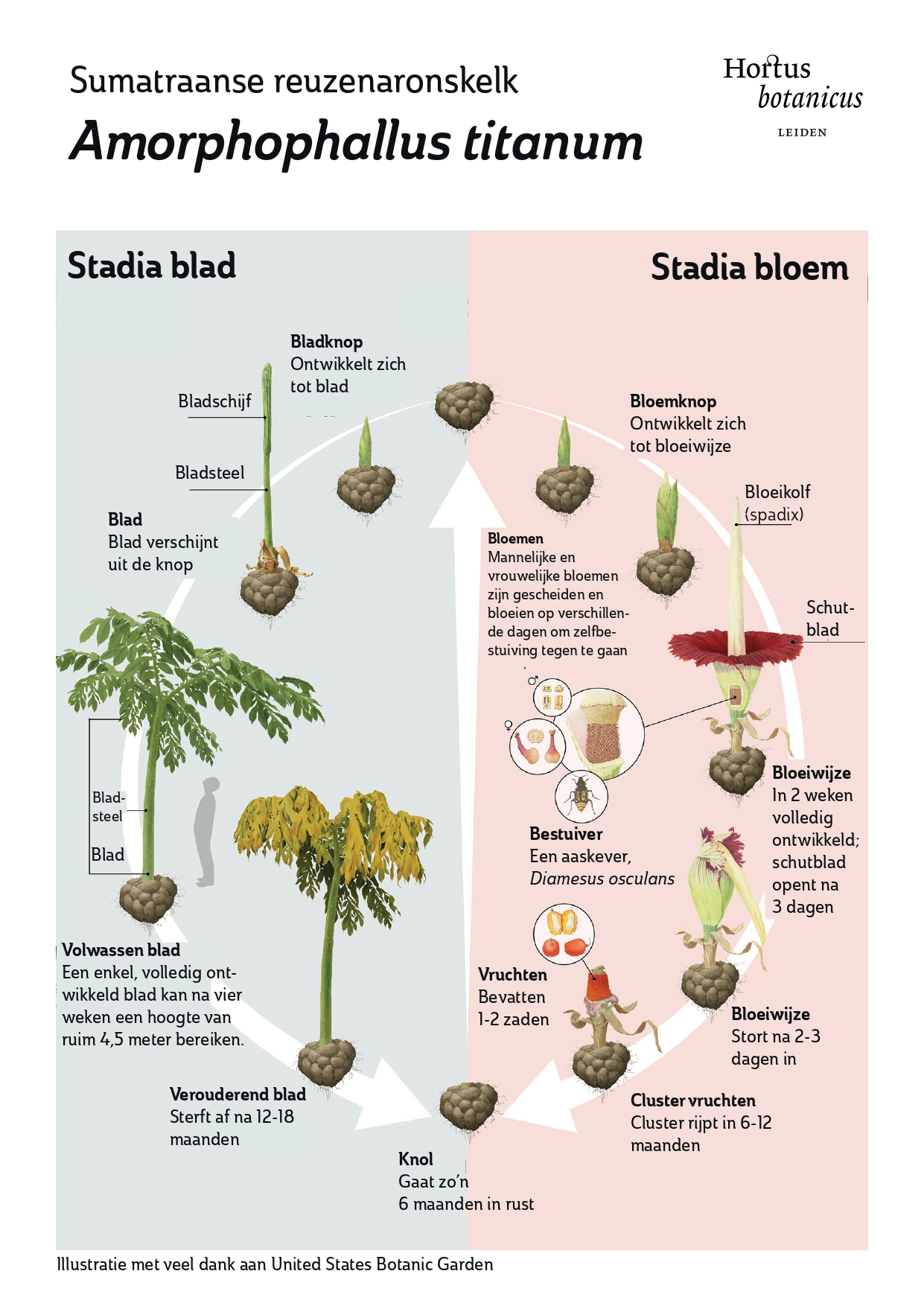 Conservation
The titan arum is native to the ainforests of western Sumatra, where it grows in semi-shaded areas. Nobody knows for sure how the plant is pollinated. Probably bij flies, because of its colour and scent, but is could also be done by beetles. Because its natural habitat is under severe pressure, the titan arum is threatened. In Sumatra, its habitat is under severe pressure because the lowland forests where it thrives are also very well-suited to converse into palm oil plantations. In old, stable forests, the plant only rarely flowers, which increases it vulnerability.

In March, the tuber of this plant was weighed and repotted. At that time we already suspected that it would flower this year. We documented this process, watch the video here: